Beers is happy to welcome Ensley F. Guffey and K. Dale Koontz, Authors of 'Wanna Cook? The Complete, Unofficial Companion to Breaking Bad. Here's a word from their press release:

10.3 million people tuned in to the series finale of the hit show Breaking Bad in 2013. The show won multiple Emmy Awards, and Bryan Cranston’s portrayal of anti-hero Walter White will go down in history as one of the greatest performances in television history. Now, for all of the fans mourning the loss of their favourite show comes WANNA COOK? The Complete, Unofficial Companion to Breaking Bad.More than an episode guide, Guffey and Koontz analyze the deeper themes of the show and illuminate the brilliant attention to detail that Vince Gilligan demonstrated throughout the program’s five seasons. This book is a must-read for any Breaking Bad fan!

Ensley F. Guffey is a historian of American popular culture and has published scholarly essays on Breaking Bad, Buffy the Vampire Slayer, Farscape, and Marvel’s The Avengers. K. Dale Koontz is the author of Faith and Choice in the Works of Joss Whedon and teaches courses in areas as diverse as communications, film, theatre, and the law. Both authors live in Shelby, North Carolina.

This event is a book signing only. 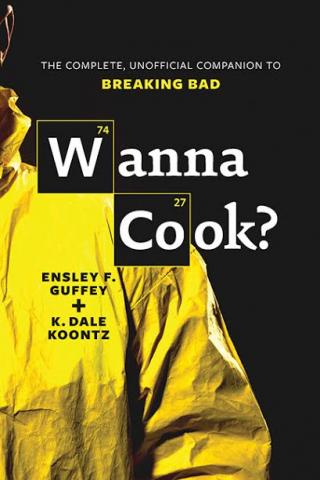